Women were designed with the ability to give birth.

When women give birth, they are doing something as natural as pumping blood, breathing, and digesting food. There is a knowledge of how to give birth within each woman, a knowledge that doesn’t even require conscious thought. 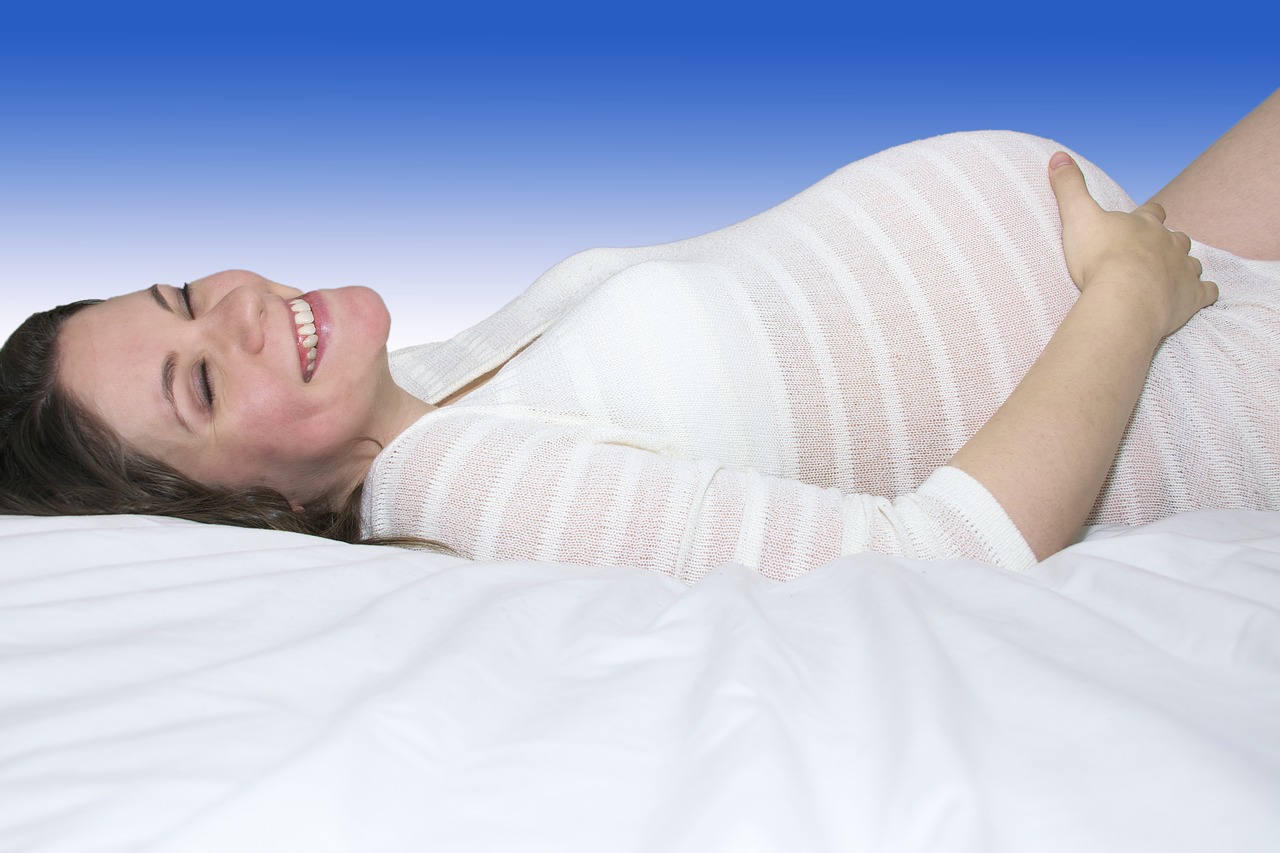 Whether it’s fictional, true, or a little of both, a TV show or novel that includes childbirth has all the elements to make any good—or bad— book or movie much more exciting. Gripping scenes show screaming women being rushed to the hospital. There they are saved by mask-faced heroes. Or maybe the helpless damsel-in-distress is delayed in transit and must be rescued instead by some other savior.

A mother and baby

may be less safe

if the pregnancy is normal.

Most people in America never witness birth as a natural and healthy part of life as people in other places do. Much of our education about childbirth comes from too many white-knuckled, made-for-screen births before we’ve even completed grade school. Is it any wonder that we tend to be frightened of birth?

We certainly aren’t coming away with the realization that mothers and babies were magnificently designed to come through birth unharmed. On the contrary, young girls learn that we cannot trust our bodies, that a birthing woman is a helpless patient, and that she and her baby will certainly die unless carefully monitored.

So we accept this when we approach our own, real-life births. Although things are changing a bit, women in our country are still often made to stay in bed, hooked to machines—as if to suggest that a disaster might occur at any second and that she should let her caregivers make all decisions rather than working together with them in a partnership. After all, “doctor knows best”—right?

What is missing in this whole picture is that it is not midwives or doctors that deliver babies. Women give birth to babies!

Women have been giving birth for a long, long time. All over the world mammals give birth without technology—and they do so without a shortage of either people or animals. Birth works! Birth is as natural and normal a process as is any of our other bodily functions, from digesting food to circulating blood. Women were made to be strong and capable of birth. This part of their body works too!

You may be surprised to know that even with access to all the latest manmade technology, the U.S. does not rank well in comparison to other developed countries when mortality and morbidity (meaning death and injury) rates, during and shortly after the birth, are considered. ¬ Women do not need to be “delivered.” Women were made to give birth to babies. This baby is welcomed by her parents during a gentle and serene homebirth. women w ere made to give birth!  In fact, the U.S. is consistently ineligible for placing within the top twenty countries. There are many countries in which it is safer to give birth to babies than here in the United States. (Population Reference Bureau 1996)

Why is this so? We assert that birth, like other aspects of nature and the natural world is something that does not routinely require instruments, chemicals, drugs, or technological gadgets. In fact, the utilization of invasive procedures on a healthy woman with a healthy baby can actually be very detrimental. Could the failure that United States obstetrics is experiencing actually (and ironically) have to do with the technology routinely used at U.S. births today? Marsden Wagner MD, former head of Women and Children’s Health for the World Health Organization for fifteen years says emphatically that, “yes, it is” the routine technology used in the U.S. birth culture today that is causing the alarming chaos we are seeing.

Yet, we are beings of a technological age. We’ve witnessed the wonders of technology. We depend upon it for a great many tasks in our daily lives. In a way, however, it is easy to make technology a kind of god. We forget sometimes that man’s knowledge and manmade machines are not perfect—that man sometimes makes mistakes. We forget that there are always better machines coming out, better computers, better phones, and better dishwashers. Looking back, we are surprised at how much better things are now than they used to be just a few years ago. Years down the road, we will predictably feel the same when comparing then with now, and so on and so on. What we forget is that the human body is one of the greatest “machines” ever created. No scientist, not even the most brilliant, has ever been able to duplicate it. All of nature, including the human body, was organized to follow pre-planned patterns and designs.

Trees know how to grow tall and full. Birds know how to make nests. Salmon that are far downstream know how to find their way back home. Newborn horses know how to get to their feet soon after birth. Seeds in the garden know how to grow into plants of their own kind. Within your body another human being has begun from just two cells. From there your body continues to help build a whole new person. Without any thought required at all by you, bones, muscles, a brain, fingernails, fingers and toes, skin, sight, hearing, an entire circulatory system, respiratory system, and so, so much more are created. Even a new reproductive system is formed—providing the way for this same process to happen time and time again. Then, immediately after we give birth to this new individual, our bodies begin to create the perfect food for him/her. And other processes are set into motion for this new being to thrive.

Birth is as natural and normal

a process as is any of our other

This part of the female body works too!

Has the human mind ever been able to re-create anything this magnificent? Not only this, but part of woman is her knowledge of how to birth. It’s part of her physiology, part of her psyche.

Yet, a great many birthing women today are themselves, incredibly enough, treated like machines needing to be monitored, tested, and improved upon by man’s technology, by doctors’ latest techniques, and by pharmaceutical companies.

What we have also forgotten is that birth has been working for ages. It was made the right way the first time! What would make us think that when it comes to birthing our babies that something about the process has become defective? The human race has never even approached extinction because the birth process didn’t work. What has caused us so much fear and doubt?

History can tell us a lot about why we are so fearful and so distrustful, and about the beliefs we hold as a culture. You can read more about the evolution of why we are where we are today in Wise Childbearing.

In her book Gentle Birth Choices, the founder of Waterbirth International, Barbara Harper tells of one doctor’s journey as he came to an understanding of these truths: “In his former days as a traditional obstetrician, Dr. Rosenthal viewed the birth process as a medical event to be controlled on a time line. Since then he has learned to stand back and empower the woman to give birth. ‘When women control the birth process and actively participate free of traditional interventions, they derive emotional strength and a great sense of achievement,’ states Rosenthal. ‘At the Family Birthing Center, we feel strongly that women are giving birth. They’re not coming here to have their babies delivered. Part of our effort is to restore control of birth back to women. We take the term ‘nonintervention’ in a very literal sense. It often means that women give birth without me using my hands.’” (Harper 1994)

What an inspiring example of a caregiver who trusts in the process and in women’s ability to give birth! There is remarkable empowerment in giving birth rather than being delivered.

But in our day and age many women may feel disconnected from their instincts. “Will I really know, and be able to do, what it is that needs to be done to birth my baby?” they might wonder. They are afraid to trust that they really do know how. But the answer is yes! A woman’s body does know what to do! In labor, without willing it herself, the wisdom of the woman’s body will come forward, and the power within her will demand her attention. As long as she isn’t interfered with, she can begin to concentrate on the sensations within her body and work with them, allowing her to more easily give birth.

While American women today are striving to be strong, assertive, convincing, open-minded, organized, energetic, meticulous, powerful, and able to work more effectively with those they deal with each day, when it comes to birthing their children many women still

Within every woman is the knowledge

of how to grow a baby and how to give birth.

Women were made to give birth!

passively do whatever they are told whether or not they fully understand the logic behind it. Many have their babies taken out for them rather than pushing them out themselves. They give up all power over their bodies, their births, and their babies. They decide on drugs before they ever know what it feels like to experience labor—drugs that besides decreasing any discomfort, reduce the power and effectiveness of the body.

At the same time, the joy and pleasure that are inherent accompaniments of truly experiencing childbirth in its fullness are also greatly diminished. Who is telling them that unhindered childbirth, under decent circumstances, can actually be enjoyable? History and the present appalling birth statistics in our country have shown us that we cannot afford to just climb onto the conveyor belt any longer. We and our babies deserve better.

Women’s bodies are designed to give birth and to do it well! Isn’t it time we took back the power?